Soaring is the science of using energy from air currents to keep the sailplane aloft. Pilot skill and sailplane design combine to extract energy from the environment for sustained flight.

The sailplane is quite possibly the most aerodynamic machine ever built. A sailplane, or glider as they are also known as, is an aircraft without an engine. It has all the same control surfaces (ailerons, elevator, rudder, flaps, spoilers/air-brakes) and similar instruments to those of a conventional powered aircraft but the method of propulsion is different.

A powered aircraft uses an engine to move forward and the air flowing over its wings generates lift to sustain flight. A sailplane trades height (potential energy) for forward motion (kinetic energy) to achieve the same result. At altitude, the weight of the sailplane is being pulled towards the earth by gravity. Therefore, in order to move forward, the sailplane must always descend at a certain rate.

Let’s examine the illustration below outlining the forces acting on a glider. The Weight may be considered as a force opposite of the Lift, L, called WL plus a force opposite to the Drag, D, called WT which may be combined to give the Resultant Force = Weight = Mass x Gravitational Acceleration. The force propelling the glider forward is the force WT Hence the Equivalent. Thrust = WT + Weight x sin (ø) 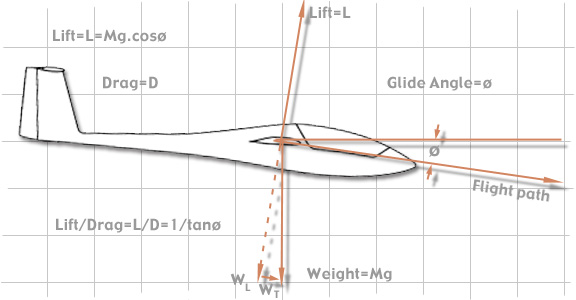 Since gliders must trade height for speed, there exists a point where the glider loses the least amount of height but covers the most horizontal distance. The ratio of height lost to distance traveled is called the Glide Ratio.

The most modern gliders can reach glide ratios of 60 to 1 in still air such that if a glider is 1,000 m above ground it can glide about 60 km before it will touch the ground. See the illustration below.